1. How I Became The Boundaries Coach 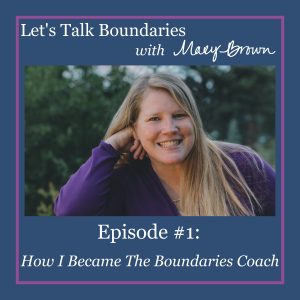 The people pleasers, the busy bees, the I can do it alls. I see you. It’s hard to say no; you don’t want to hurt feelings or make anyone feel bad. But then you get into a place where you feel resentment creep in and you feel like everyone takes advantage of you because you won’t say no. I’ve been there.

Meet Mary Brown, a boundaries coach who lacked boundaries like many of you. Through years of personal and professional development, Mary transformed her life by deciding, communicating, and following through with implementing boundaries.

In today’s episode, Mary provides listeners with practical ways to place boundaries in their lives without sounding like defiant and stubborn teenagers. She shares her personal stories that allow listeners to feel heard and connected without getting overwhelmed or discouraged by their lack of boundaries.

Mary is here to help listeners make empowered choices and remember their worth while guiding them through those hard-to-navigate conversations.

Want to learn more about boundaries?

– Boundaries IQ quiz HERE
– Take my Boundaries 101 Course
– Do you want to overcome your hurdles of people pleasing? Book a free call with Mary!

You’re listening to Let’s Talk Boundaries. I’m Mary Brown, The Boundaries Coach. This is a podcast for the Go-to Girl, the nice guy, Mrs. Busy. The yes man, the people pleaser, and anyone who spends so much time taking care of everything and everybody else that you don’t have any time or energy left over for yourself. Together we will learn to overcome busyness and resent. To find freedom and contentment. I invite you to join me on this journey. This is gonna be good.

Episode one, How I Became the Boundaries Coach. I grew up in a big, huge family. We had five boys, four girls, two parents, and zero boundaries. We did things like wear each other’s clothes, eat off each other’s plate. Sign each other’s report cards. . I was especially skilled at writing my dad’s name and I could get up to $5 per signature. As you can imagine, life in a home with 11 plus people could be chaotic. When someone was upset, we were taught to stop what we were doing. Go see about them and stay with them until we made them feel. . I wasn’t usually the one who was upset. I was the kid who had to go see about them, and I got pretty good about making them feel better.

I felt responsible for their feelings. I wanted to help them, and I became a people pleaser. When I went to college, I became a resident advisor. I was so good at taking care of people that I got an award for being the best ra. I met a guy who liked me. We started dating and he asked me to marry him. So I said, yeah, in hindsight, I think I agreed to marry him because he wanted to marry me because the church community we belonged to encouraged us to get married.

It wasn’t just my marriage, though. I became a caregiver in most of my relationships. . I was taking care of my friends, my siblings, my teammates, my coworkers. I was constantly doing all the things that everybody else wanted me to do. In fact, I was so good at knowing what they needed that they didn’t even have to ask me.

So what was the problem? Well, anticipating everybody’s needs became exhausting, and I started to feel resentment. I was so busy taking care of everybody else, and I honestly could not understand who was supposed to be taking care of me. So the problem with not having boundaries was that I ended up resenting the people around me.

Even good people, even people that I loved. My husband wanted to have children, so I had a. . I remember those first days in the hospital, and if you’ve ever been around a newborn, maybe you can relate to that sweet celestial spirit that they bring to the world. I was taken aback by how precious, how valuable and how deeply loved this child was. It was like he was just born valuable. I thought I had gotten the best baby. The more I thought about it, he hadn’t done anything to earn his worth. So I started wondering if all people are born valuable, I decided, yes, I do believe that everyone comes to earth inherently valuable and equally valuable. I was still sure I got the cutest.

A few days later, we were still in the hospital with some complications and I started thinking, Wait, if he was born valuable and everyone is born valuable, what about me? Was I also born inherently valuable? Here I was trying to earn my worth, and I decided yes, just like my baby. Just like you. I was born valuable.

I left the hospital with a week old baby, knowing that I needed to change the way I had been treating myself and the way I’d been allowing others to treat me. I’d like to say that it was a quick and easy road to change, but that would be a lie. Understanding my worth gave me permission to be a valuable human with needs and wants and feelings that mattered, but I still didn’t know how to implement this new understanding into my existing life.

My journey to stop people pleasing and start living with boundaries included three necessary steps. First, I had to get to know myself by asking myself questions like, What do you like? What do you want? How do you wanna spend your time or resources? With more self-awareness, I got more confident, started making better decisions, until eventually I had some clarity about what I was willing to do and not willing to do.

Second, I had to learn how to talk about myself. I think the first few times I tried setting a boundary, I sounded something like, You can’t say that to me anymore or Do that one more time, and I’m done. I went from feeling like an agreeable child to a defiant teenager. I had to practice communicating with compassion so I could feel good about how I was showing up to the conversation.

After I learned how to talk about it. Then I had to learn how to follow. . When someone did not respect my boundary, I learned that I was the one who I needed to rely on and respect myself and follow up with real self care. Boundaries are a learned skill in this process. Took me years to learn. During these years of personal boundary development, I was also growing professionally.

I graduated with a degree in psychology from Emory University in Atlanta, Georgia. I moved to Fort Collins, Colorado and started a career in social work for over a decade. I served in various social work and management roles in my community. I worked with individuals and families who struggled with mental health, addictions, trauma, and abusive relationships.

There is not much I haven’t seen. I learned to treat people with kindness, to have clear and kind conversations. To work towards solutions. When I was a child protection supervisor, there was a lot of staff turnover. This is a big problem in the child protection system. It takes approximately two years to learn how to do the job proficiently and the national average for length of employment for a case worker is less than those two years, which means that the case workers are doing their best to make difficult decisions in a highly stressful field, but they’re not staying in the job long enough to learn to do it proficiently.

So I joined a committee of leaders and managers, an effort to increase. Worker retention. I noticed the difference between those who left and those who were able to stay were those who had confidence, self care, and boundaries. It was the workers who knew how to decide to communicate and follow through that were able to tread that water.

So I helped create a coaching program. To help the workers learn how to build confidence and have assertive conversations and have self care, and we hired a team of coaches for them. Then I was bummed that I had to be the manager because I would’ve rather have been the coach. This was the first time I remember thinking that I wanted to be a coach.

A few years later I took some time off and I had this beautiful opportunity to reflect on my personal journey and my career path. I thought about how boundaries had really helped me. Boundaries had helped me to befriend myself, to maintain relationships with loved ones who were struggling to stop feeling so busy and exhausted to walk through a divorce in a co-parenting situation with grace.

To sustain a highly stressful job for many years. This was the first time in my life that I did not need to work, and I had the freedom to be really introspective about my contribution to the world. I thought about all the good case workers that I had supervised and if I should return to that job or not.

I knew my skill set, but I wanted to make sure that I was using my individual gifts, my unique talents, and my personal experiences for what I was meant to do as a woman of faith. I studied it out in my mind. I wrote about it in my journal, and I prayed for answers. I received an image in my head of me sitting across the table from a woman. There was a notebook on the table and I was helping her get from the left side of the page to the right side of the page. I continued seeking answers about what this meant. I tried thinking of myself and whatever roles I could be, but none of them seemed to fit. So I went out and bought a bunch of notebooks.

I considered volunteering in my community or church service, but that didn’t quite feel right either. It became clear to me that this was my next career. So helping people have better boundaries was what I was called to do, and it was supposed to be my career. I excitedly Googled boundaries careers, and guess what?

I could not find any available jobs to apply for. So I began my wrestle with the Lord. I remember saying something like, I’m trying my best to use my gifts and talents to love and serve others, but I’m not really sure you understand how things work down here, Lord. A boundaries worker is not a real job. A few months later I lost this argument and became a coach.

I had overcome people pleasing myself, and I knew I was called to help people learn how to have better boundaries. I’m known as the Boundaries coach because I specialize in helping people have boundaries. I never thought I would be a business owner, but there weren’t any boundary coaching jobs out there.

The reason that I’m starting this podcast is because boundaries are my favorite thing to talk about. I’m so grateful that you chose to listen to Let’s Talk Boundaries. If you like this podcast, please leave a review and share it with a friend. To learn more about boundaries, you can find me online at boundariescoach.com, or you can take a Free Boundaries IQ quiz to see where you’re at on your journey towards healthy boundaries.

And remember, You were born valuable and your value never changes.

Next2. What Boundaries REALLY AreNext